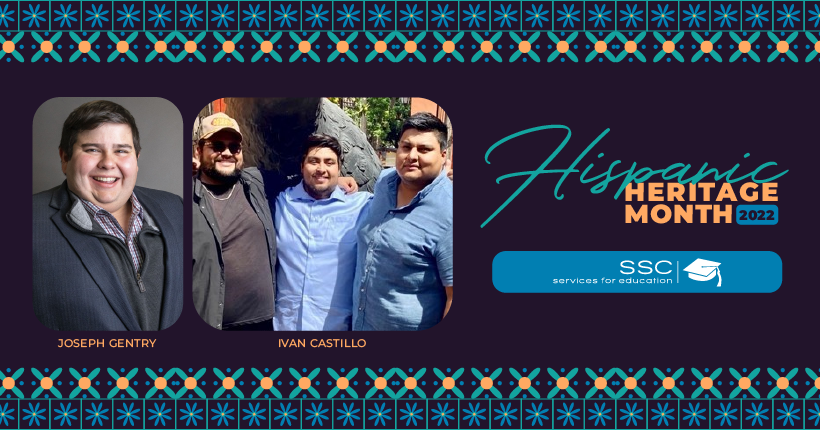 Hispanic Heritage Month is celebrated from September 15 to October 15 each year and honors the cultures, traditions, and contributions of the American Latino community. SSC values opportunities to have impactful conversations with our associates about diversity, culture, and how we can celebrate our unique backgrounds daily. To commemorate Hispanic Heritage Month, we sat down with two team members to discuss their experiences as proud members of the Hispanic community.

Joseph Gentry is originally from Laredo, TX, a small town located on the border. He is a proud Mexican American who seeks opportunities to share his culture and bond with others with similar upbringings. Joseph has been with SSC for four years. He started as a Manager in Training on the Startup, Training, and Transition (STAT) Team, where he traveled around the state of Texas, starting up operations at new accounts and onboarding new associates. He currently holds a permanent position as Director of Facilities at an SSC account in Washington DC.

Ivan Castillo is a first-generation Mexican American, a first-generation college graduate, and is proud to live the American dream. He grew up in El Paso, TX, as a part of a close-knit family, with parents who left everything behind, including family and successful careers, to create a better life for their children. His parents own a small maintenance business that provides landscaping services to residential homes, law firms, and real estate companies. Ivan went to college, earned a degree in international business with a minor in finance, and has found his home at SSC, where he is building on his knowledge of the facilities industry with the hopes of one day taking over his parents’ business.

One of the most distinct and recognizable pieces of Hispanic heritage carried by Ivan and Joseph is their ability to speak fluently in Spanish. This aspect of their culture has made them assets to the team at SSC and ambassadors of their culture in the communities they serve.

In his time at SSC, Joseph has taken the opportunity to connect with many other associates over traditions, values, and culture.

“Many of the associates we onboard share the same cultural identity as me, whether they were born Mexican American, Latin American, or Central America. Everywhere I have gone, my ability to speak Spanish makes it more comfortable for an associate to speak their native language. That’s always the first thing I do: I introduce myself and let them know that I speak English and Spanish so that they can choose to speak the language that makes them most comfortable.”

Like Joseph, language is a piece of Ivan’s culture that he is passionate about carrying on personally and in the workplace. He is one of the most fluent Spanish speakers on the STAT Team and is often requested at specific accounts to ease the transition and help onboard new associates.

While language should be accepted, sometimes, individuals lack patience and appreciation for diversity and culture. Recently, Ivan had a negative interaction with someone who overheard him translating, and it was discouraging for him to experience such discrimination. He was quickly reassured, however, when two hours later, he received an important phone call:

“John Lane, VP of Facilities Systems and Support, called and asked me to be present at an account in Austin, TX. I was requested because of my language abilities. It was crazy how that opportunity presented itself. Just two hours before John Lane called me, I had issues because I was speaking Spanish, but then shortly after, I was requested because of my ability to speak Spanish.”

Situations like this remind Ivan exactly why he chose to study international business in school. In his program, he had to learn several languages. Today, he speaks French, Portuguese, Spanish, and English.

Joseph and Ivan have very different backgrounds, but another value that they share is the importance of family. To Joseph, this means gathering and creating memories with friends, friends of friends, and extended family.

“Growing up in a Hispanic community, we are all about extended family. Every time we get together, it’s not just immediate family- there are always new friends, friends of friends, and it’s always about spending precious moments together in person. On the STAT Team, I would never stay in the same place for long. All my associates and I would always want to spend my last day together, where we would all gather and eat lunch before I moved on to my next account.”

Ivan recognizes that although his close-knit family lives in different cities, they are always there for each other and simply a text message away. He will never take for granted the sacrifices his Hispanic parents have made for him.

“I think a lot of people take for granted the sacrifices that immigrants and Hispanic people make for their families. Thanks to my parents’ resilience and selflessness, my brothers and I have been able to build amazing lives in the United States. We live our life by a simple statement: Our success must justify their sacrifices.”